Before a coffin is placed inside a cremator, the cremator technician checks the nameplate of the coffin to ensure that the correct person is being cremated. The technician fills out an identity card which follows the remains throughout the entire cremation process, guarantying correct identification. Any metal or heavy plastic handles are removed and recycled at this stage as they do not allow us to achieve our stringent emissions targets, if they are cremated with the coffin.

Once the cremator reaches an operating temperature of 800 degrees centigrade, the coffin is placed inside the cremator in an automated process, as shown in the pictures. This is known as “charging” the remains. Once the coffin is placed inside, the highly computerised cremator controls the whole process and continually monitors the emissions of each cremation. There is always a technician continually checking the whole process. 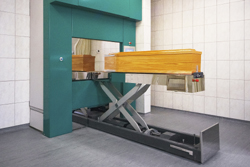 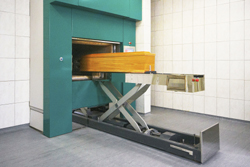 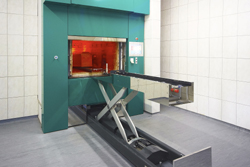 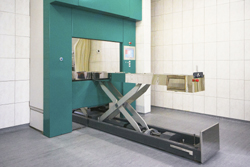 The actual cremation itself takes on average 90 minutes. However it can vary from 40 minutes for an infant’s remains to 150 minutes for a large heavy remains. The temperature during a cremation will peak at around 900 – 1000 degrees centigrade. Please note that the chamber into which the coffin is placed accommodates only one coffin at a time. Each coffin is cremated individually! Only in the rare circumstance of a mother and a very young child are two remains cremated together.

What is left after the actual cremation are the main skeleton bones (85%) and coffin ash (15%), which together are called the cremated remains. These cremated remains are raked into a separate cooling chamber /hopper and the next cremation commences. After two to three hours of cooling, the cremated remains are placed inside a machine called a “cremulator”. Here they are mechanically crushed into the final ashes (about 3-4 litres on average for an adult remains), which the family will receive in an urn or casket with the identity card inside.

From start to finish the cremation process takes on average five to six hours. However it can be shorter or longer depending on the size of the remains to be cremated.

Funeral services can be viewed in our Victorian or Garden Chapels.

Funeral services can be viewed in our Victorian or Garden Chapels with the Live Streaming Links (Green Buttons) shown below.

NB!! The chapel attendant will only activate the live streaming of the service you wish to view until just before the scheduled service start time. However, there may be several minutes delay if a prior service in the same chapel has not finished on time.

Please bear in mind that not all services will be live streamed as some families will opt out of this service option. Plus the bar chart at the bottom right side of the live streaming video screen allows you to adjust the Volume.

Please note that there is NO live streaming in our Angels Chapel.